I have moved, please visit me on my new blog location!

In the last month, I have launched a new site for my jewelry. After all these years of blogging on blogspot, I realized that blogging on a seperate site is not helpful for search engine traffic to my website. If you have clicked on the "home" button on the top, you may have discovered this new site already. So, please check it out, and hope to see you on the new blog!

Posted by Natasha Wozniak at 9:21 AM No comments: 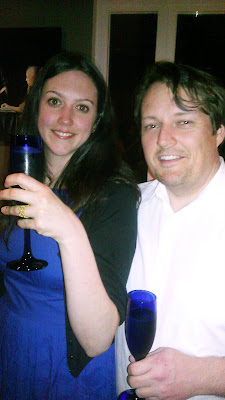 Claire and Georg, celebrating their engagement

I am often incredibly touched by the stories that accompany the gifts of jewelry that I make. Sometimes, the jewelry is a physical aspect of the most beautiful aspects of being human. It was my honor to be part of one of those very special stories this spring.

Claire is a friend from way back. In fact my parents have been friends with her parents since we were infants. Claire and I became close in high school, when a year in between grades becomes a little bit less significant. We often spent time together watching movies followed by eating diner sundaes. After I moved to New York, I was delighted when Claire followed a few years later, becoming a teacher in the NYC school district. We now live a ten minute walk from each other in Brooklyn.

Besides being a very dedicated teacher, Claire is also a very talented photographer, with a specialty in street photography. Her portfolio is on flickr, and she has some amazing photos there. Really, check out her photos.

Through the photography community, Claire had the good fortune to meet Georg, another talented photographer. After admiring each others' photos, it came to be that Claire and Georg met, when he visited NY from Germany, and they also fell in love with each other! This is such a wonderful turn of events, that I get watery-eyed even writing about it. 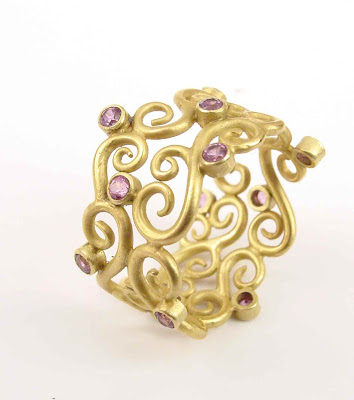 I was so honored and delighted when I received a message that they had become engaged, with a request for me to make a suitable engagement ring. I immediately thought of the ring shown above, mostly due to a ring that Claire loves to wear, passed down to her by her mother, and this ring leads to yet another layer of this family story.

Claire's mother, Paula is from Portugal, and her father is from Germany. They met while studying English in London. After meeting, Paula left to work in Mozambique, and Claire's ring is a memento of her mother's time in Africa. While she was in Africa, she was writing to Paul, and they had their own long-distance love story. Eventually, they were reunited, married and moved to my hometown of Racine, WI.

Paula is possession of gold British imperial coins, which were passed down to her by her relatives, so I was requested to make the ring the ring out of this gold and I readily agreed. As the coins very high karat gold, when I made the recipe for the gold for Claire's ring, I had the choice to make a redder color of gold, matching the color of the ring from Mozambique.

With all of these various strands coming together, as they do for all couples, making wedding bands is a wonderful things indeed!
Posted by Natasha Wozniak at 2:59 PM No comments: 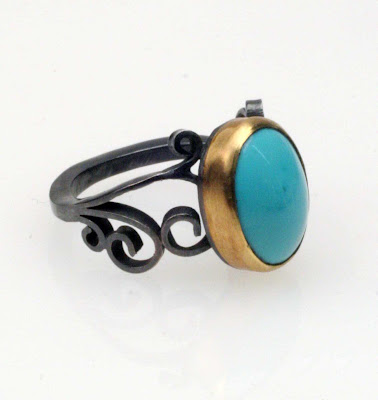 Turquoise Ring with Filigree,
Blackened silver and Persian Turquoise
Next week, I am heading to S. California to show off some of my latest pieces. Nearly a year ago, my friend and jeweler colleague Karin Wordin opened her gallery in Laguna Beach, CA. Fortunately, I was in L.A. at the time and was able to join her for the opening party. This year, she is hosting me for an exclusive trunk show. I will have a big collection of work with me, including the ring above and the earrings below, that I have just finished. 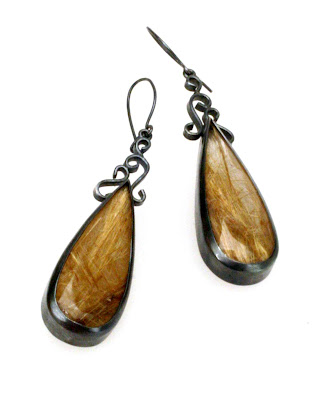 In the gallery, we will also have a really fantastic selection of colored gems. Visitors to the gallery can spend some time with me, designing a custom piece with one of these delicious gems. A sampling of these gems can be seen in the photo below. 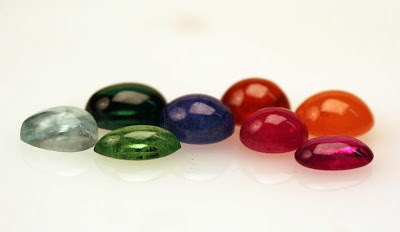 Here are the details for the show:
Thursday April 7th 6-9pm-reception during Artwalk
Saturday April 9th 4-7pm-jewelry and cocktails!
Appointments are available on Thursday, Friday and Saturday 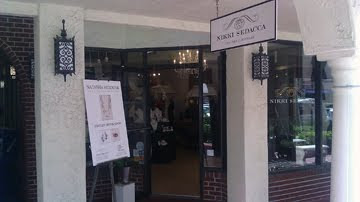 Yesterday I arrived in Sarasota Florida and I am going to spend the weekend showing my work at the two beautiful galleries owned by Nikki Sedacca. During the day, I will be at the Palm Avenue location, shown above. In the evenings, I will be at the 530 Burns Gallery. Here are the addresses:
Nikki Sedacca-the Art of Jewelry
49 South Palm Ave.
Sarasota

There are a lot of things going on this weekend, so I am excited to be the guest artist of Nikki and her wonderful team!
Posted by Natasha Wozniak at 11:35 AM No comments: 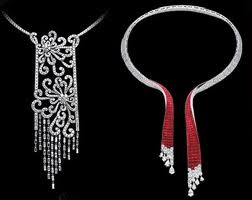 Set in Style: the Jewelry of Van Cleef and Arpels
at the Cooper-Hewitt Museum
until June 5th

Jewelry from one of the great European jewelry houses. I love to see the ingenious way that the jewelry is put together. I saw the Cartier exhibit last year in San Francisco, and while I did get overwhelmed by the diamonds at times, the jewelry always displayed the highest level of craftsmanship. My only wish...as a jeweler, I have such a strong desire to check out the back, which I couldn't always do! 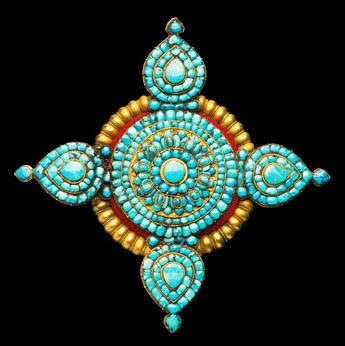 I lived in Nepal for two years, and Himalayan jewelry is a love of mine. The Tibetan amulet boxes, called gau, were the starting point for me when I began making lockets. When travelling in remote Himalayan villages, it is very common to see women wearing their gold and turquiose jewelry, or oxblood coral, which can scarcely be found nowadays.

I looks like with the coming of spring, I have good reason to get out of the studio and see some amazing jewelry pieces.
Posted by Natasha Wozniak at 1:43 PM No comments:

Fresh Off the Bench 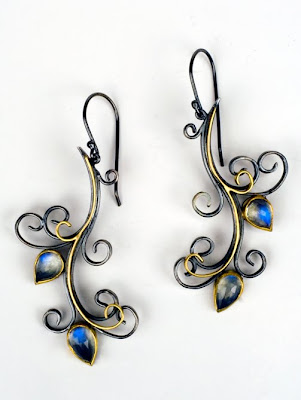 Yesterday, I finished a couple of new pieces. I am excited to start adding color back into my collection. For a couple of years, I have been very focused on the black silver with just gold accents and some orange sapphires sprinkled in. Now, I have some rainbow moonstones (with mostly blue flashes), and some tourmalines to work with.

Early indications are that thee rings are going to be very popular. I made them in the late fall as new samples, and I have had quite a lot of interest already. I tend to test out a new direction with a one or a few pieces in that theme. I wear it myself and see how I feel about the piece day to day. If I get a strong response, I go forward and make a collection around that theme. 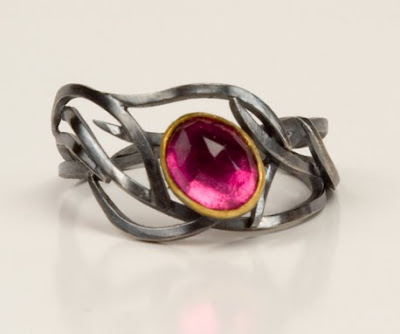 I haven't done anything "branchy", in a long time, but I have a had a wire mockup of a branchy ring on my bench for a long time. Finally, the idea was ripe after I put this rosecut tourmaline on my bench next to the mockup.

Stay tuned for more!
Posted by Natasha Wozniak at 10:48 PM No comments: 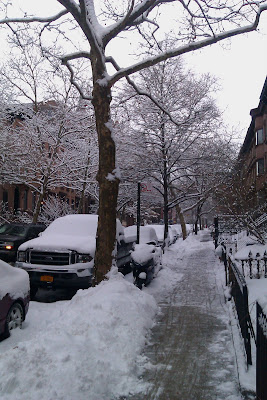 A view of my street in Brooklyn today

Since 2004, I have been attending craft-oriented trade shows in February. Sometimes one, sometimes the other, and for a few years, both of them, back to back. At first, it was great, giving me really great exposure and lots of orders. There was even one year that I ran out of pages in my order book.

However, times change, and even though I and many others have had great success at these shows, it seems like the time for me to try something new came a while ago. Even so, I was on the verge of doing another show this winter. When it came time to pay off the rest of the booth fee, I realized, I just didn't want to go this year. I want to stay home, avoid driving a truck in a blizzard, make new work, finish some commissions, make a new website, and the list goes on.

Even though I catch myself getting nervous about how I am going to generate new business, I know that even if I had shown up, I am probably not going to miss out on a full order book. Instead, I am going to keep traveling to new places where my work is not represented, and make sure that all of my fabulous stores and galleries have the very best possible work from me. If that strategy leads me to Puerto Rico or Florida in March, so be it!

That being said, I have some jewelry-oriented shows later in the year, but that just gives all the more time to make sure that I have some really wonderful new things to show.
Posted by Natasha Wozniak at 10:38 PM 1 comment: